At Home with Catherine 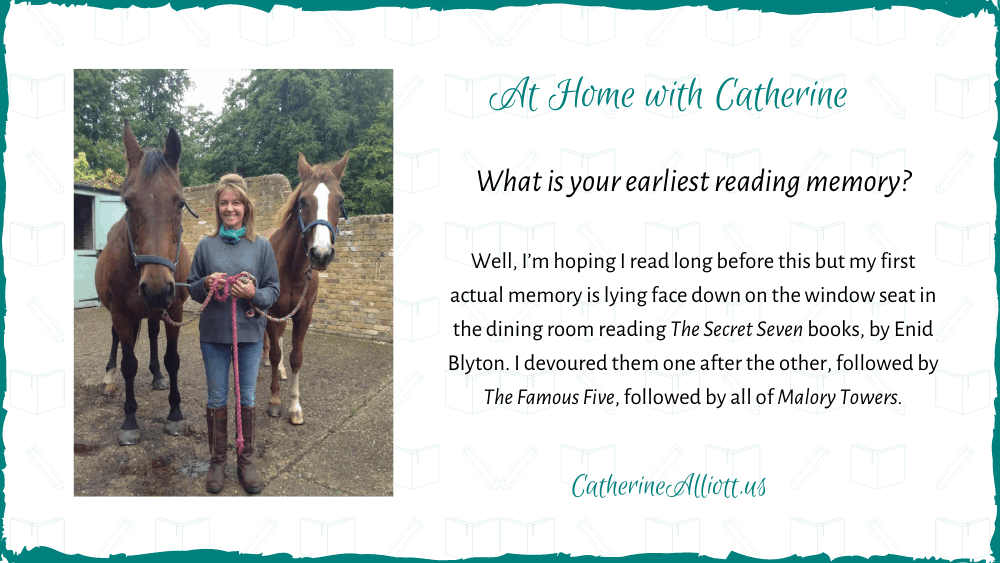 A behind the scenes conversation with the bestselling author – Catherine Alliott

What is your earliest reading memory?

Well, I’m hoping I read long before this but my first actual memory is lying face down on the window seat in the dining room reading The Secret Seven books, by Enid Blyton. I devoured them one after the other, followed by The Famous Five, followed by all of Malory Towers.

I’d come home from school and do that every day, and my mother complained I never chatted to her about what I’d done at school. But then we didn’t have a television, so I suppose it was today’s equivalent of getting stuck into the TV for hours. Very easy, escapist TV, but what on earth was wrong with Enid Blyton? Why were the libraries so sniffy in those days – you had to buy your Blyton, couldn’t borrow it. Too low-brow. It certainly got me hooked on reading, though. I don’t think it matters what you read, comics, backs of cereal packets, even texts, as long as you read.

Which fictional character would you like to go out drinking with and why?

Emma Woodhouse (from Jane Austen’s Emma) would be a great gossip, wouldn’t she? You’d find out everything about everyone – although it might not all be true – but it would be wonderful to scheme with her about all the locals.

Would she drink much though? Not sure… she was an only child so might be skipping off home to her father. Lizzie Bennet (from Pride and Prejudice), I think, would drink more and being one of many her absence would not be so noticed. If she walked all the way to see Jane, getting mud all over her dress, which was so frowned on by Bingley’s sisters, she clearly didn’t give a damn about convention, so I’m sure she’d walk miles to the pub and wouldn’t mind walking home in the dark, either. She’d be a laugh, too. Might have to separate her from Jane… lovely girl, but she’d be on orange juice, wouldn’t she?

Not many people know this, but I’m very good at…

Hurdling. I can hear the roars from my family already. Nobody believes me, but when I was at school, I was very good at hurdling. Foolishly, I’ve obviously expanded this over the years and talked about the county team – a mistake, as they know this to be a thumping lie. But honestly, I was pretty good at hurdling.

How do you prefer to write – by hand, typing?

Both. The initial draft is always in longhand and I fill about six A4 exercise books. I only write on one side of the page and make notes on the other. Then, when I’ve finished, I go back and put it all on the computer. But if I get confused, or stuck about what I’m trying to say, I’ve always got my original version beside me, which often, is better than what I’ve spent hours trying to improve on the screen. Sometimes it’s not, but it’s always a comfort to have it there.

And finally, what’s the question (and answer to the question) no one has ever asked you but you wish they would?

No one’s asked me if writing is easier now than it used to be, in that I’ve had more practice. Twenty-five years, to be exact.  I’m not sure it is because when you’re younger, you have no fear. I’d just set off, with no plot or story in mind, just a fistful of characters and think – it’ll be fine. I’ll think of something.

These days, as in everything, I’m a bit more cautious. Need more of a plan. But I still have absolutely no idea what’s going to happen at the end, that’s the thrill.