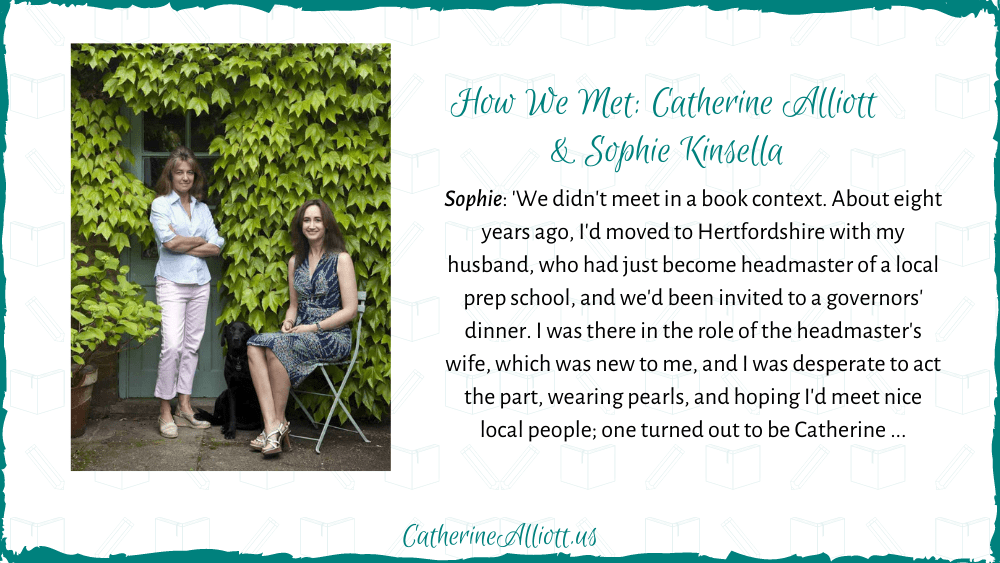 A former financial journalist, Kinsella (right in picture) wrote several novels under her real name, Madeleine Wickham, before adopting the pen name Kinsella for her bestselling ‘Shopaholic’ series, adapted into the film ‘Confessions of a Shopaholic’, in 2009. She lives in London with her husband and five children.

We didn’t meet in a book context. About eight years ago, I’d moved to Hertfordshire with my husband, who had just become headmaster of a local prep school, and we’d been invited to a governors’ dinner. I was there in the role of the headmaster’s wife, which was new to me, and I was desperate to act the part, wearing pearls, and hoping I’d meet nice local people; one turned out to be Catherine. She looked very open and happy in her own skin and we spent most of the evening in gales of laughter; I don’t think we even talked about books – we connected over schools and the countryside.

Funnily enough, having read her books, I felt “I think I know you.” An author’s characters, their style, and take on life and environment can give you an inside track into their mind. And now I know her there’s this magical aspect to a friendship when I’ve read her latest novel and recognize tiny personality essences in there.

Catherine is more balanced and serene than I am. I aspire to be like her as she always seems calm, mellow, and happy, managing to juggle family life and work, while I get obsessive and I let my books take over my life. She’s got the sheep and the hens to feed, living in this gorgeous house in a rural idyll and she seems serene about it all. So when I went through a time of feeling particularly overwhelmed by the size of my career, she was a great inspiration.

Her children are older than mine, so every time I heard a story about them growing up – parties, that sort of thing – I would prick up my ears and think, “OK, that’s how I’ll do it”. She’s one step ahead, so seeing what she does feels like going fast forward and seeing what life is going to turn into.

Our approach to writing says something about our differences, I think I like planning out a book for ages, plotting it all out, and mulling a lot, while Catherine sits down with a pen and thinks, where shall I start? And then she goes on a magical mystery tour. Which just shows how she’s more easygoing, and I’m slightly more obsessive.

We have a similar take on our work, though. We’re proud of what we do and we’re both relaxed about the term “chick lit” – though I like the term romantic comedy. It’s an honorable thing to write a book that helps someone laugh and escape real life for a while. In some ways, our books are similar in that they find the flippant, inappropriate laugh in any situation. Though hers have become rural – a world I haven’t written about and she does brilliantly. I admire the way she can write animals and family life; I love the way she nails that teenager parent dynamic. Although it’s light fiction, she’s clear-eyed about her characters and there’s a lot of insight.

Alliott’s first novel, ‘The Old Girl Network’, written while she worked as a copywriter, became a bestseller in 1994. She has since written a further 16 bestselling novels including ‘About Last Night…’ and ‘The Secret Life of Evie Hamilton’. She has three children and lives on the Hertfordshire/Buckinghamshire border with her husband, an assortment of horses, sheep, chickens, and dogs.

The evening we met Maddy was playing second fiddle to her husband, Henry, the new headmaster of the local prep. I knew she was this incredibly famous novelist, but that night she was the headmaster’s wife, which must have been daunting for her, with us old fogies all staring at this young, pretty woman.

But we hit it off; we knew we both wrote – though she is far more successful and prolific – and after that night we had lunch together. We talked about everything under the sun; children, houses, real life.

I’d already read her novels, as had my girls, who were early teens when the first Shopaholic books came out. We all felt that they were very amusing and cracked along at a great speed.

For me, now, I have to fight the laziness with writing, while she is more driven. Because we both write lighthearted, romantic comedy, there’s a tendency to think that what we do is frivolous. But there is such a lighthearted side to life – so why not write joyful books about joyful women? I’m not ashamed of writing “chick lit”.

Though Maddy is a clever girl, who went to Cambridge, she is quite scatty – perhaps that’s why her books’ heroines are as well. I remember once, after she’d moved back to London, when she proudly invited me to lunch and to go see her son, a chorister, sing at Westminster Abbey. I drove down to London for the day, and we turned up at the Abbey – except the man at the door informed us they weren’t singing that day.

She’s very stylish-looking; lovely coats, nice handbags, always in a beautiful elegant dress, while I’m always in jeans; I’m more agricultural than she is; I go to the local farm shop, she probably goes to Harvey Nicks. And you can see that in our houses, too. I’m a lot messier and my house is filled with piles of stuff, while her home, in Wimbledon, is organized and stylish.

She’s very good at bolstering low moods. I remember going to see her in London once when I was feeling a bit ho-hum. At the time I was thinking, “I’ve been doing this for 20 years,” and was having doubts. She looked at me and said, “Come on, you’re good at what you do.” And I thought, “Yes. She’s right!”