Chatting with Catherine about Writing 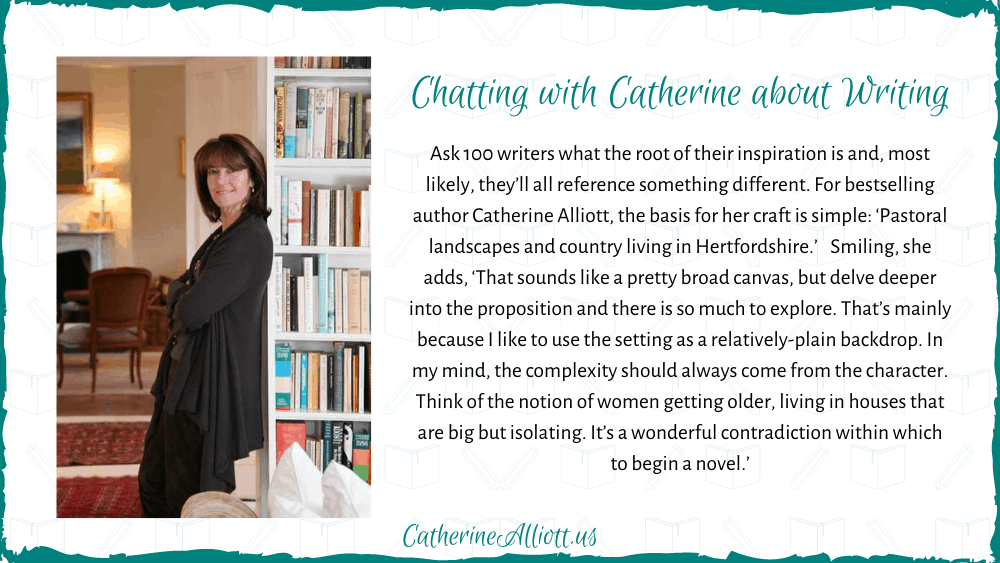 Ask 100 writers what the root of their inspiration is and, most likely, they’ll all reference something different. For bestselling author Catherine Alliott, the basis for her craft is simple: ‘Pastoral landscapes and country living in Hertfordshire.’ Smiling, she adds, ‘That sounds like a pretty broad canvas, but delve deeper into the proposition and there is so much to explore. That’s mainly because I like to use the setting as a relatively-plain backdrop. In my mind, the complexity should always come from the character. Think of the notion of women getting older, living in houses that are big but isolating. It’s a wonderful contradiction within which to begin a novel.’

It was more than two decades ago that Alliott swapped the city commute for a more relaxing lifestyle in the countryside near Tring. And when the author isn’t pen in hand, you’ll find her tending a menagerie of animals, including sheep, chickens, horses, and dogs, who live in the rambling grounds of the ivy-covered red-brick country home she shares with her husband. Her day-to-day routine is certainly far removed from the hectic capital.

‘I tend to write in the mornings and ride my horse in the afternoons – that’s to relax, a relief. Whatever it is, I need to do something active and proactive in the afternoons, because my craft is something that’s quite a solitary thing. I need a release.’

This leisurely lifestyle proves fruitful in feeding the pages of her books. ‘Well, I used to write about girls in flats when I was younger,’ she says. ‘I can’t write about that anymore because I don’t know anything about it, so I write about middle-aged women living in country houses and all the shenanigans that go on – their friends, neighbors, teenage children, animals, grandparents.

‘I think family life really is what I write about,’ she explains. ‘My books are very much character-led, not plot-led, so I don’t sit down and plan out a plot with a structure like that. I start with the main character, usually written in the first person, and that character dictates the book in a way.’

Unlike other authors, Alliott doesn’t rely on a favorite writing desk or view from a certain window. Instead, she embraces the freedom of a domestic setting. ‘I write in longhand, so actually, it doesn’t matter where I am. In the winter it’s by the fire; in the summer it’s the garden. If there are too many people in the house, I go one step away and get a deckchair and sit in a field with a flask of coffee. That’s my perfect environment, under a tree somewhere. The second draft of my books will be typed up on the computer, but the first stage can be anywhere.’

So what led the City copywriter to up sticks and enter a rather less stable life of penmanship? Alliott says she made the transition more by necessity than choice – having been caught writing her first novel under her desk during her 9-to-5 job, she suddenly found herself without a desk to sit at.

‘Looking back, I thought: “Right, I’ll show them”. I didn’t see it as a career; I saw it as a way to prove to myself that I could do something creative. I mean, I was working in a creative industry anyway, so writing a book seemed even better at the time. I have to say I didn’t see it as a long-term career, just that I’d finish the book. It was only when my publisher asked if I had another one and I said “No, why do you ask?” He said “Well some people have about six under the bed”, and that’s when it started.’

Since her first foray into published fiction, Alliott’s writing style has developed. ‘I haven’t consciously evolved it,’ she offers, ‘but I can’t help but think 25 years is a long time, and actually, when I look back at old books, I find them full of exclamation marks which I don’t think I use quite so much anymore. I think it was a lighter style of writing I adopted when I was younger. As you get older, you become slightly more serious, so perhaps it’s evolved in that way a little.’

Now a full-time writer, the Catherine acknowledges the difficulty in holding down her job demands, a family, and bringing together a story. But asked to offer advice to others looking to follow her path, Catherine begins with one firm recommendation: ‘Don’t get yourself fired!’ she laughs. ‘That’s quite a high-risk and pressurized way of going about a new career! I think my advice would be to do a bit each day; don’t leave it for weeks at a time then have another go – try to keep the momentum going, maybe do a bit each evening. And it’s really corny, but be true to what you know. If you write about things you don’t know, it doesn’t come across terribly well.’

An author with a tendency to create strong female characters, Alliott’s own literary heroines are a little left of center. ‘I know I’m supposed to be drawn to the feisty characters, like Cathy in Wuthering Heights, but actually I rather like Jane in Pride and Prejudice – always overlooked for Lizzie Bennett.’

And from within the pages of Alliott’s novel you can expect another heroine to shine. My Husband Next Door is rooted in a relationship that has broken down over time.

‘It’s a couple who I think still love each other but who realize they want to go their separate ways.

‘As it stands, they live apart – she in the house and he in a barn at the bottom of the garden. That situation is actually not that unusual these days – people can’t necessarily separate because it’s not financially viable. So they must conduct different relationships, but under each other’s noses, and that has an effect, as you can imagine!

Does it give her any ideas for her own situation? ‘Well, as privacy goes, it’s an original one, but I’m happy as I am!’ .